Mario Paschetta is born in Milan in 1949 and begins to paint when he is 14: his painting is traditional but pregnant of density of matter.

Thanks to his staying in the cultural environments in Milan, such as  Jamaica bar in Brera, he gets in touch, though as a spectator, with many artists who will later on contribute to write the history of Italian art.

Furtherly, despite his parting from the painting due to professional reasons, he continues attending the artistic environment and the art galleries.

In 1992 he begins an exhaustive study on the matter, both in terms of materials and use: so the influences that artists such as Burri, Crippa and Mattioli had on his works shine through his canvas.

The works of Mario Paschetta arouse an immediate interest both for his technique and for the pictorial construction of his canvas; his painting-non painting, the original non-perspective portrayals, his abstraction - anti abstraction are all sources of discussion.

Trento Longaretti, undisputed master of our twentieth century painting, recognizes Paschetta's originality and ability to describe a poetic world through the use of a personal language.

In 2001 an important solo exhibition is held at the National Museum of Modern Art in Gazzoldo degli Ippoliti (Mantua), and in that occasion Maurizio Sciaccaluga highlights a peculiarity in the art of Paschetta, that’s to get the observer to touch physically the works, because his landscape, representing far earths in the past, is "not a reported but a recreated" landscape and his language is translated into a need of contact as in "a kind of Braille painting."

Enrico Giustacchini underlines another peculiarity: a construction of the landscape that passes through a stratification, defined as "unusual vertical survey."

Not only art critics are interested in the work of Mario Paschetta.

In 2003 Ruggero Sicurelli, sociologist and psychologist dealing with artistic creativity, publishes a book with the title "Elements of Psychoanalysis in Arts - Freud and the Artistic Creativity", analyzing Paschetta's work he notices the "Freudian metaphor of archaeology, in strength to which the psychoanalyst deals with the stratigraphical analysis of the soul."

Mario Paschetta works are present in various private and public collections; many are his presences  at the main italian art exhibitions.

In 2003 the attendance at the event announced by the Association Mare Nostrum for the opening of the "Sea Fortress" on the Isle of Palmaria Portovenere (La Spezia) under the sponsorship of the Republic Presidency and, in 2004, the participation at the First Biennial of Italy's Unification at the Royal Palace of Caserta.

The works of Mario Paschetta arouse more and more interest also abroad: in 2003/2004 his works are chosen by the Japanese multinational Citizen as testimonial for its advertising campaign.

In 2005 an important solo exhibition follows in Lecco at the City Civic Museums, in the beautiful historical frame of the Visconti Tower, then Paschetta works take part to an important exhibition called "The great Masters of '900 and the new languages of the contemporaneity " at the Olympic Game Village in Turin during the Winter Olympic Games 2006, that hosted great twentieth century artists as De Chirico, Mirò, Rotella, Marini too. 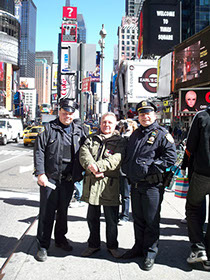 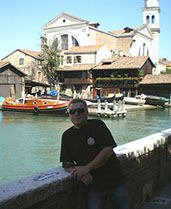 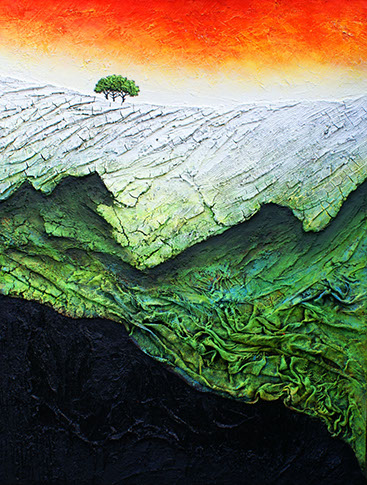 Significant the solo exhibition "Beyond Tannoiser" too, held in 2006 in Sirmione del Garda by B&B Gallery of Mantua.

To notice, among the 2007 events, the public exhibition "In the sign of matter" held at the Civic Museums in Valdagno (Villa Valle).

2008 opens with the important collective event "Goal" at the European Parliament in Strasburg; to follow his taking part at the 2nd edition of the Biennial Arts of Italy's Unification in the Monumental Center of St. Leucio in Caserta.

Meaningful the event "Notes of a Lombard Traveler" by Anna Caterina Bellati, that shows Paschetta discovering places of the Lombard territory:an exhibition that starting from Valmadrera's (Lecco) at the cultural center Fatebenefratelli, goes up the lake of Como till the Pretorio Palace in Chiavenna (Sondrio) and it ends at the civic Mediatheque of Imbersago (Lecco), celebrating the river Adda so dear to Morlotti.

In the month of August Mario Paschetta participates at the eleventh edition of OPEN at Venice Lido, International Exhibition of Sculpture and Installations at the same time of the Venice Film Festival.

2008 closes with two other important events: the first, "Void and Shapes" in Chiavenna (Sondrio) where paintings, sculptures and installations are located in the squares and public buildings of the city; the second, hosted in the Colleoni Castle in Solza (Bergamo) called "3D Landscapes", during the celebrations of the 25th anniversary of the Adda Nord Park Foundation, supported by Region Lombardia and the cities of Milan, Bergamo and Lecco.

In 2009, besides the presence at the main art fairs, Mario Paschetta exposes in Paris at the Jena Palace, center of EU Safety and Defense Assembly - Western Europe, inside the collective exposition "Agazzi Jena Paris 2009", then followed by the collective exhibition at the Parisi Museum - Maccagno Valley (Varese) during the "Maccagno Award".

Afterwards, in October Paschetta is present in Lugano with the solo exposition "Paths" at the UBS (Swiss Bank Union) Center in Lugano, followed in December by an important public-institutional exposition "Mario Paschetta IN TURIN" at Turin's Azimuth Association, integrated in the XII edition of "I expose" by Contemporary Arts Turin Piemonte, where the artist Paschetta is busy with works of great size and suggestion.

To remember, besides, his presence at two events of national significance: "Flogisto" at the Convention Palace of Roccamonfina (Caserta) and "Italica" at the MAUI - United Italy Arts Museum in Teano.

The 2010 is a significant year for Mario Paschetta, full of commitments and projects.

The exhibition season opens in February with a collective public exhibition at the Civic Museum of Modern Art Parisi Valley of Maccagno (Varese) entitled “Acquisitions 2010”, where recently acquired works are exsposed to the public, including a white monochrome of the artist from Milan.

Later, Mario Paschetta participates in an exhibition of international artists at the Centre d'Art Contemporain in Briançon (FR) and, in the month of May in Presezzo (Bergamo) at a public/institutional exhibition called “Towards Bergamo - Mario Paschetta Palace Furietti Carrara”, an event that has included a collection of large paintings alongside the latest productions in the exhibition halls of the sixteenth century palace.

The summer offers Paschetta a pleasant surprise too: during the months of July and August, Paschetta together with 24 other artists in the City of St. Quirico d'Orcia (Siena) - in an environment like no other as the Val d'Orcia and, in particular, the seventeenth-century Palazzo Chigi Zondadari – exposes in the exhibition entitled “Demon to everyone its own dream. Signs and Dreams”: an exhibition edited by Vera Bracci and presented by Gianni Resti, director of the Museums of the Province of Siena.

Also in July, to notice, at the Convention Palace in Roccamonfina (Caserta), the inauguration of the Magma Museum, a museum between two regions: a few works by Mario Paschetta are part of the exhibition.

In September, Paschetta returns to Briancon at the Centre d'Art Contemporaine with a solo exhibition entitled “Traditions and Modernity in Italian painting”.

But it’s between the months of October and December 2010 that the exhibition season of Mario Paschetta culminates with an important travelling exhibition - conceived and proposed to the artist by Angelo Piazzoli, General Secretary of Credito Bergamasco - which, starting in October 2010 from the city of Bergamo (in central exhibition hall of the Cultural Center San Bartolomeo), in December 2010 and January 2011 arrives to the Museum of Sacred Art and Culture of Romano of Lombardia (Bergamo); in both occasions Mario Paschetta had a great success of audience and much appreciation among critics.

The travelling exhibition called “Genesis: at the beginning” - of great cultural, theological and spiritual meaning- has been promoted, developed and supported by the Credito Bergamasco Foundation in Bergamo, in co-operation with the Foundation Adriano Bernareggi of Bergamo and the M.A.C.S. Romano di Lombardia (Bergamo).

At the beginning of 2011 Mario Paschetta is involved together with other Italian artists into an important project in the USA starting from March 2011 in New York by attending the International Artexpo.

Meanwhile in May 2011 he proceeds with his travelling exhibition “Genesis: at  the beginning” in the church of San Michele Arcangelo (Museum of Sacred Art “San Martino”) in Alzano Lombardo (Bergamo).

Indeed since March 2011 one room  in the headquarters of this Bank has been wholly dedicated to this occasion with relating paintings.

In June 2011 the travelling exhibition “Genesis: at the beginning”  takes place at the building Polenghi Lombarda renovated by the Architect Renzo Piano in the Bipielle Center exhibition room belonging to the Foundation Banca Popolare di Lodi.

Last 11.11.11 (properly chosen for its symbolic and superstitious value) Mario Paschetta with some Italian artists opened an exhibition in the famous fifth Avenue in New York , USA, after two years wait from the start of this great project of joint venture.

The 2011 ends with the public exhibition “Those of New York” in Sesto Calende (Varese) showing  works of each Italian artist attending the exposition in New York City.

The show “Those of New York” is sponsored by Varese Provinces and Tourism office.

In March, 2012, with part of a public exhibition in France, at Villefranche Sur Mer in the French Riviera (exhibition space, Chapelle Sainte Elisabeth), commissioned by local authorities after the great success of the exhibition in the previous year, in Briancon. The month of April opens with a major exhibition in Milan in the public spaces of the Matalon Museum Foundation in collaboration with Arte Colonna, an exhibition curated by Francesca Porreca and participant MIBAC (Fourteenth week of culture ) sponsored by the Ministry for Cultural Heritage and Activities. Following a significant participation in " The emptiness and Forms III" event in Chiavenna, once again with the curator Anna Caterina Bellati .

Full of events the months of July and August with the public exhibitions: "Crucifixes of Author" events at the space of the Regione Lombardia, followed with his friend writer Kayone "Unconventional" at the Royal Palace of Caserta , an exhibition curated by Alessandro Mantovani of Stradedarts and in Clusone Bergamo with the Fondazione Credito Bergamasco , at the Museum of the Basilica in the Oratory of the Discipline , with the fifth round of the traveling exhibition "Genesis." To remind , in October , the exhibition "Mix: artists and trends ."

The year 2012 ended with two events: "Secret Collection" in Capua, a collective of street and contemporary art in Milan and with "Art for WWF" an exhibition of works by artists both historical and contemporary, with a final auction in favor of the project WWF for the protection of the Alps Event held at the Matalon Museum Fondation.

The exhibition of 2013 begins with an important event: "Art is life" - When art meets the Sacred- public event held in the complex of the Cathedral of Caserta during the Festival of Life and follow in the month of March with the staff "Terre timeless", an institutional exhibition at the Broletto of Pavia. The exhibition is organized with the collaboration of Stradedarts and curated by Francesca Porreca art curator of Pavia Museums. 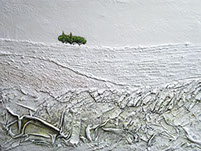 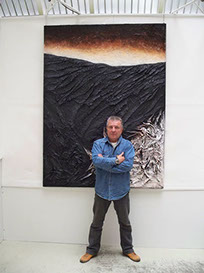 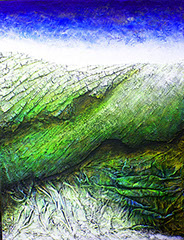 His path continues with a series of attendances and events like the exhibition held at the Foundation Dario Mellone in Villa Rescalli and with the special exhibition called "Timeless Lands" held in the "Nunziatella  Military School" in Pozzuoli.

Besides of them he took part with some of his paintings at the event " Meetology" at the Archeological Museum of Teano and "With a Little Help From My Friend" at Maga Museum in Gallarate.

His presence is also remarkable during "The New Florence " Biennale at the special " To the Event in the Event : Kuntkammer in Progress" event and ends with the exhibition of some paintings at the Headquarters of BNL PARISBAS in Milan during Teleton event.